How Owl House Came to Be 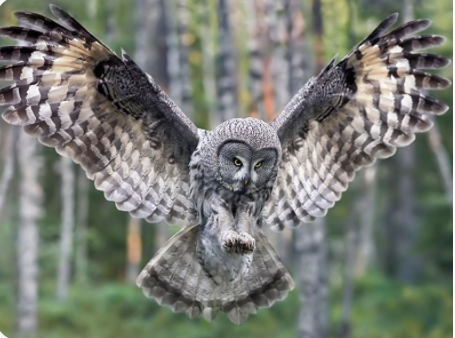 It all started with the dream.

I was standing high on a windswept bluff, looking out over a stormy, choppy ocean. Out of the fog a bird appeared, swooping in towards me. I remember seeing its big, curved beak opening and clamping on my nose and thinking, “This is going to hurt!” But it didn’t. The huge bird pulled me off the cliff and next I knew I was standing in a steep, grassy, sunlit mountain meadow.

The scene reminded me ski slopes in the summertime—broad expanses of grassy hillside, bordered by thick forest. I turned to see the owl (I now could identify her species) flying backwards, entering a pathway into that deep, primordial forest. She held three feathers fanned in her talons and looked at me intently, as if to emphasize the importance of what she was conveying. When she was almost out of sight, she turned and disappeared into the primordial forest. Somehow, I knew she was a mother, off to her nest of owlets deep in the forest.

Most of my dreams are very unremarkable, but sometimes not, and this was one of them. This was one of those that stayed with me. It was so unusual and symbolic and mysterious. It was clearly a message. But what was the message?

A few weeks later, I was driving with my kids to a Thanksgiving family reunion. On a starry night in the middle of nowhere, we pulled to the side of the road to switch drivers. As I was walking around the front of the car, the headlights illuminated a lifeless owl on the ground, just in front of the car. A vehicle must have hit her, but her body was in perfect shape. I remembered my recent dream, considered her another omen, tucked her body in the way-back, and continued on in the sub-freezing temperatures.

Several months later, I moved into a new home. One night my bedtime read had to do with how to make your house a home. One suggestion was to give it a name. When I stopped to consider what I might name this new home, of course I came up with ‘Owl House.’ I turned the page to continue reading and there it said, “For example: ‘Owl House.’  I immediately began doubting my choice, thinking maybe I had seen that and been influenced by it subconsciously. I closed the book and went to sleep. That night I got called to a birth (I was a home birth midwife for 25 years).

I had never seen fog in Hailey, ever, but this was so thick the 2 stoplights were barely visible, much less the edges of the road. I needed to travel 40 miles as quickly as I could, but the fog was so dense I didn’t feel comfortable even going 20 mph. When you’re trying to get some place in a hurry and you have to drive 20 mph, it’s a bit aggravating and anxiety-provoking, as I’m sure you can imagine.

After about 15 minutes of this, I noticed headlights coming up in my rear-view mirror. I decided that if the car passed me, I was going to jump in behind it. It did and when it pulled back in front of me, what do you think the license plate said? ‘OWL.’ Nothing but ‘OWL.’ No numbers, no other letters, just a real, honest-to-goodness Idaho license plate.

So… I got my message that Owl House would definitely be the new name of my house, and I got to the birth in time. A doubly memorable night.

Five years later, after my youngest child was out of the nest, I no longer needed a two-bedroom house. I had been renting out a little guest cabin in the backyard for extra income. I decided that this guest cabin would suit me perfectly and decided to rent out the main house instead. I had indulged in many painting projects in the house—muraled walls and ceilings and faux rockwork—whatever suited my fancy. Some of them were not finished, so I set about finishing them before I rented it out.

One weekend I had cleared out the entire living area to touch up the painted floor. Several years earlier I had ripped up the wall-to-wall carpeting, tired of the constant need to clean it. Plywood subfloor was under it, which I decided to paint. After several years of use, it needed some touch-up and a new clearcoat.

As I was painting away, hour after hour, a vision appeared in a corner of the room, clear as day. It was a grouping of old-fashioned toys—a hobby horse, a ball, a wooden rocker, a small chest—looking like someone had stored them away in the corner of an old attic. When I looked back, it wasn’t there.

The next morning, still painting away, I saw the same vision in a different corner of the living room. Once again, when I looked back, it, too, was gone. Hm… I’d never seen a vision of any sort before. I really wondered what these were about—why I was seeing them.

That afternoon it happened again, back in the original corner. At that point it occurred to me I was being told to turn the house into a children’s play space, something better than what our current preschools had become—very academic, not play oriented. I didn’t know why I was supposed to do it, but I was certain that I was supposed to do it. And so that’s what I did. And of course, it kept the name Owl House.

It didn’t take me long to see that these days working parents simply cannot provide the continual ‘parenting’ that children need. In today’s society, children’s care settings needed to step up and provide this continual mentoring that children need to grow up well. At first I mused that perhaps I was supposed to write a parenting book.

For the first year I just kept waiting for the book to spill out of me magically, like the visions. Nope. Nothing. I decided, since this wasn’t happening, that I needed to think on my own what I thought children needed. Their physical, emotional, and intellectual health was declining alarmingly. Why? What could be done about it?

It became my mission to discover what was wrong with our children and how best to care for them in their early childhoods. I began receiving information from an inner world. Lots and lots of information. I wrote for hours and hours, day and night, for several years. It was all information about what children need and why they need it and how giving children what they need, developmentally, would change the children, their families, and the world at large. It was big and inspiring. The truth of the teachings was undeniable. I had a dining table size bedside table upon which I collected stacks and stacks of pages of writing. After 2 years I cleared the table and the papers created a stack 6 feet high—I measured (3 stacks 2 feet high each).

A couple of years later, the table contained a second 6 feet of written pages. I decided to compare the first two years of writing to the second. I was curious what the development would be. To my surprise, they seemed to be pretty much the same. Until then, I had been avoiding reading material about children because I wanted the teaching to come totally from within. Once I knew it well enough, I began venturing out into the children’s education arena, to see how what I had learned fit into current understanding.

From what I had learned, I knew I wanted to write about what nurtures children’s growth and development and what undermines it. I wanted to write about the importance of free, unstructured play, the importance of nature, and the importance of learning to be kind and respectful to all; also, the danger of insecurity and of virtual reality for brain growth and development. I discovered that these topics were already well covered. There was nothing about any of them I could say any better. We already know everything we need to know about what children need to grow well and thrive.

My contribution would be the how to implement this knowledge, how to put into actual, concrete practice, as an immediate, direct benefit for children. Owl House is this model to address whole child wellness and to put in place brain-based care for our children.

We have it within our power to create Golden Rule Schools as the norm for all of our children prior to kindergarten as an essential form of early childhood socialization. Free play in natural surroundings bounded by the Golden Rule allows them to thrive, physically, emotionally, and intellectually. This kind of care prevents the chronic, historic brain disability that has held back humanity for thousands of years. It essentially immunizes children against the prejudice and greed so prevalent today. This transformation of brain capacity is achievable in a single generation, starting with the children in front of us.

The purpose? Blossomed Brains enabling Peace on Earth, Goodwill Towards All to finally be manifest on this Earth.

Share:
« Golden Rule Schools Address The Most Important Question: Are We Equal or Are We Not? 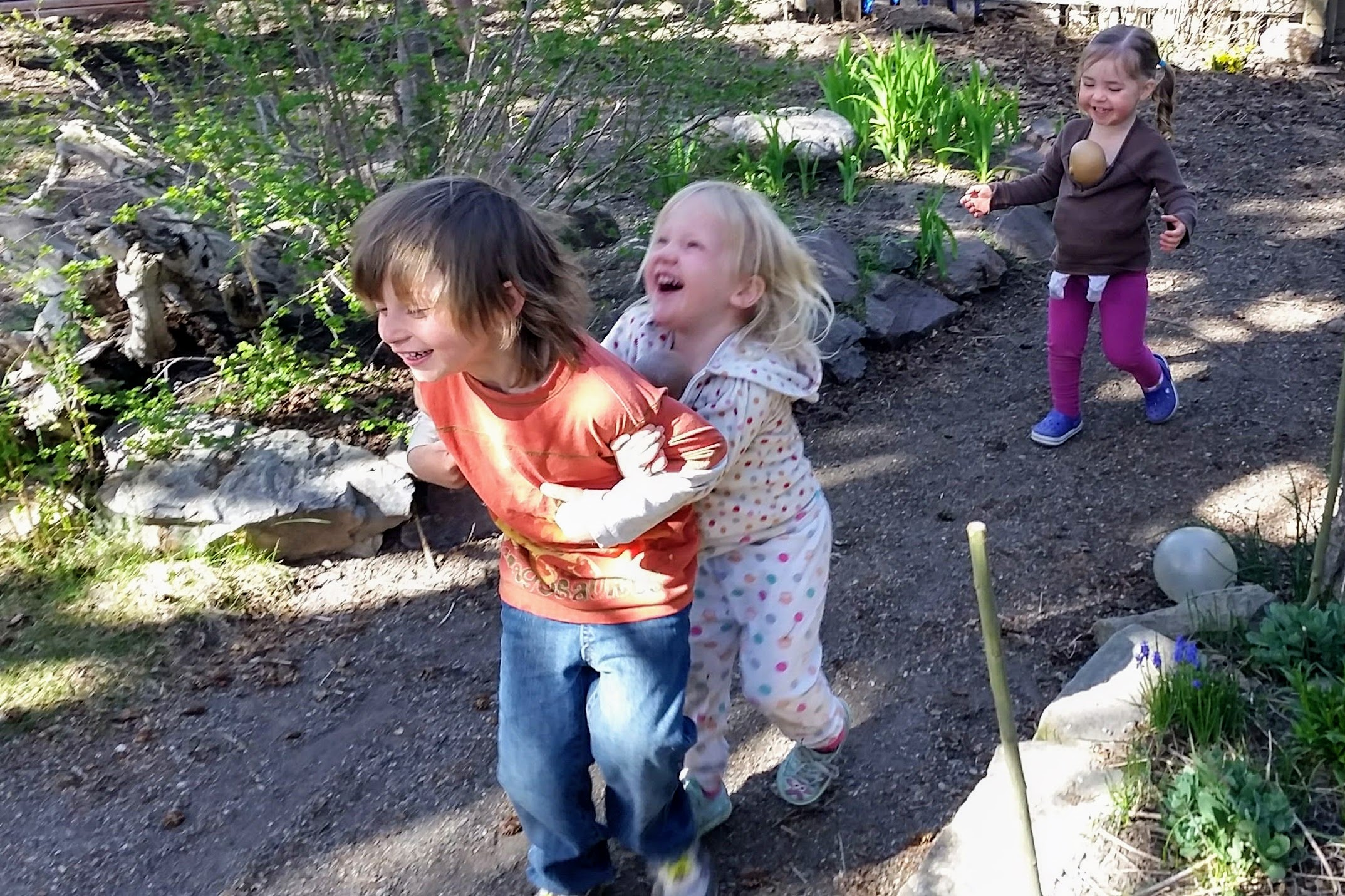 Golden Rule Schools Address The Most Important Question: Are We Equal or Are We Not?

Want your child to be successful in all future life endeavors? ARRANGE A VISIT